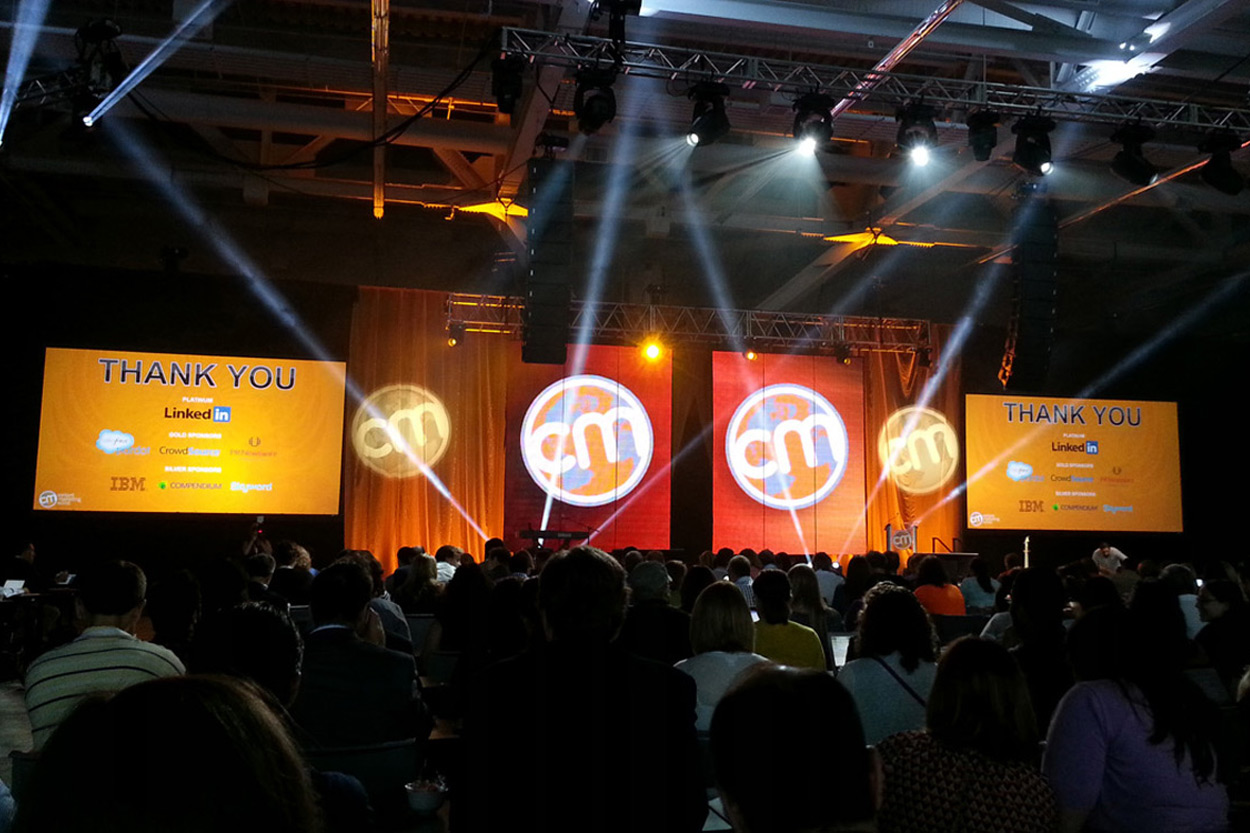 September 15, 2014 In News and Events By Mike Cottrill

Content Marketing World 2014 made its way through Cleveland last week and brought a train of marketers, writers and sales people with it.

The event was a wonderful meeting of minds to discuss all things content, and there was lot to see and learn.

The team was there, and I put together some valuable content nuggets we heard that are worth sharing. Here are seven interesting takeaways from the week. It should be noted that the lessons learned may not have been the ones the speaker identified was trying to impress upon the audience.

Ann Handley is a huge name in the content marketing industry and she encourages content writers to have a voice and be interesting.

The next frontier of content marketing is storytelling, and Handley emphasized that that requires good writing. It’s easy to get scared and make bland content. And it’s easy for people to ignore that content. Don’t get caught in the bland trap. Make your stories interesting and don’t be afraid to develop a personal brand voice.

2. Cut through the noise with a simple, captivating story

Learned from Steve Rotter, VP of marketing at BrightCove, @sjrotter

Steve Rotter led a fascinating lunch session that had a memorable stat: The adult attention span gone from 12 seconds to about 7 seconds in the last decade. That is actually shorter than the attention span of a goldfish.

That means it’s harder than ever for content creators to create a message that captures the audience’s attention. To deal with that, Rotter says you should cut through the noise with a story that captures someone’s attention and brings home a simple point or two. He pointed to this loud and powerful video as a good example of effective story telling to make two basic points.

Perhaps the biggest lesson from hearing Scott Stratten give a keynote address is to learn that anytime he is on stage you should grab a seat and listen. Stratten is energetic, hilarious and full of stories of marketing campaigns gone bad.

He focuses on the little issues that trip marketers up, including the use of metrics to show something is working, even when it clearly isn’t. Metrics are important, but he pointed out how often they can be misleading or how the tool can be just plain wrong. For example, he has a one page site that serves only one purpose: letting users push a button to hear Darth Vader yell no (go ahead, try it). Again, the site is one page. The audio on the site is less than three seconds. But when Stratten shared his Google Analytics with the audience, the average time on site was nearly 24 seconds and the average pages per visit were 1.13.

The numbers are funny, but they mix well with his point: Some metrics aren’t perfect and to spend time analyzing them is a waste of time. His key metric for the site: visits and how much money he makes off his ads. Everything beyond those success metrics only exists to confuse him.

Learned from Jay Acunzo, Director of platform and community at NextView Ventures, @jay_zo

As a child, Jay Acunzo and his sister were tasked with making their parents dinner one night. Jay had been learning his way around the kitchen and took to the task well, making them a taco salad. It was something he knew how to make and the rewards were immediate: His parents couldn’t have been prouder of their young chef.

It’s a good story, to be sure, but it brings to light the fact that we are all guilty of finding something that works and beating that success into the ground. In content efforts, this leads to market saturation and your audience tuning out. You can’t just keep creating the same content, you have to mix it up to keep your audience engaged.

5. Take a lesson from the software world

Software teams get an A for managing distributed workflow and mastering productivity. Scott Brinker says it’s time to adapt their workflow for the content marketing industry.

He recommends taking methods from the agile software world to create a backlog of tasks that need to be done and prioritize them. There are many pieces to the agile workflow, but he recommends becoming a student of all of them and taking what works for your team.

Learned from Paul Roetzer, Founder and CEO of PR 20/20, @paulroetzer

Paul Roetzer is an author and inbound marketing specialist who sees the world of content marketing as an industry still in its infant stages. How far behind are most content teams? He pointed to a study that showed only one of the top 10 college marketing programs in the country requires a digital marketing class as part of an undergraduate degree. That means that the content marketer who can educate their team on the core principles of content creation can take advantage of the marketplace.

When the crowd wasn’t clapping wildly for him as he dropped into the southern drawl of Frank Underwood, Kevin Spacey reminded everyone that the story is the most important part of any content, and it’s the creator’s job to tell a good story.

Spacey has played many roles in his career, but he defined his favorite characters as those who take risks and make interesting decisions. Much like Ann Handley’s advice at the start of Content Marketing World, he pushed the audience to be interesting and different because the world has never had higher expectations of story tellers.

Mike is a founding partner of NgageContent and manages the strategy side of our agency. As a sales and marketing executive, he is always on top of the biggest and brightest opportunities within the inbound marketing industry.